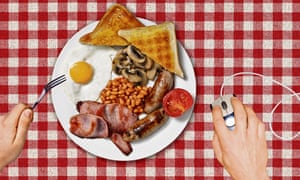 Eating in the office is not usually considered one of life’s great treats. It is hard to see breakfast meetings, or scarfing a sandwich while staring at a screen, as anything other than a sign that our leisure time is being swallowed by capitalism’s gaping maw. Nevertheless, tucking in at work can be the silver lining in a stressful day. Here is a countdown of the 10 best moments.

Most refreshments found gliding around the office at the Christmas do are, it’s true, shocking. But how else to work out the next steps in your career? There is no quicker way of gauging your job satisfaction than by observing how forgiving you feel towards – or how personally victimised you feel by – the crappy crudité selection.

OK, sneering at others does not exactly showcase the best of the human spirit. Nonetheless, there are few more effective ways of working through your antipathy toward a colleague than by (inwardly) mocking their food habits. No, we are not what we eat; just because your annoyingly perfect superior meticulously counts out eight almonds for their 4pm snack, it does not mean they are no fun at parties. Still, it makes you feel better to privately pretend that’s the case.

A sister activity – one that is similarly mean-spirited yet rewarding – is competitive meal prep. “There’s definitely an element of competitiveness to bringing in food,” says publicity manager Millie Seaward, while Hanna Kenne, who works in publishing, admits she cooks something to bring in “to make my colleagues jealous”. In the office top-dog stakes, it is of little consequence that you recently saved the company from ruin – unless you can also rustle up an aesthetically pleasing aubergine bake. 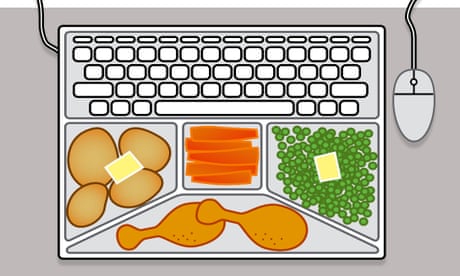 Drinking at work can go wrong as often as it can go right. But, oh boy, isn’t it a hoot when a) it doesn’t go wrong, and you can get smashed at your desk, or b) it does go wrong, but for someone else? Harry Wheeler, a senior manager at a tech company, merrily recalls a colleague taking “a running dive at a giant beanbag” during happy hour, only to “faceplant into the floor with a loud crunch”. An emergency dentist was required the next morning – as was a new front tooth.

True organisation involves getting up early enough to breakfast at home. But you can ape the optics of someone who has their act together by arriving promptly and enjoying a serene breakfast at your desk. Kenne, who starts the day “enjoying a cup of Clipper’s Latin American instant coffee and devouring toast at my desk while lazily going through my emails”. It may not be as impressive as a boiled egg at the crack of dawn – but to someone who, when they worked in an office, regularly got up too late to even extract a cereal bar from a cupboard on the way out, Kenne sounds like self-discipline incarnate.

Kenne admits to working through lunch “partly so I feel better about nipping out for takeaway coffee”. This is also known as the Slacking-Offsetting lunch. Tucking into a Tupperware container at your desk is, really, no great sacrifice. In many ways, the office provides ideal mealtime conditions: shelter from the elements; no need to feel sheepish about consuming food prepared at home, as you would in a cafe. Capitalise on this, and thereby bank goodwill for when you “run an errand”* later in the afternoon.

Your team spend the winter months attributing their antisocial tendencies to the weather. If it were warmer, you would definitely spend lunchtime hanging out in the park, you all agree – before going back to scrolling in silence. When summer does arrive, you switch to blaming the heat. Nevertheless, there is always one sunny day when an outdoorsy type insists you go for a picnic. It’s great. Fun! Relaxed! Someone buys you an ice lolly. Better still, you know it won’t happen again for another 365 days.

Thom Ward works in the Singapore office of a British insurance company, where “lunch is a 90-minute commitment” and everyone eats out together every day. He prefers to grab something solo. “If I go with people it means I have to eat where they want to eat,” he says. There is sometimes no greater feeling than “forgetting” a group lunch – and then slinking out later for a feast for one. A team-bonding session in Côte? Pff. You can have a samosa and five chocolate lollipops.

You were out until the small hours. Instead of jabbing at a photocopier, you long to be lying in a cool bath, ideally while watched over by a kindly medical professional. But, hang on, perhaps your deskmate is feeling similarly “peaky”, judging by the sheen of perspiration on her forehead. Ten minutes later, the two of you are inhaling carbs at the cafe down the road, gleeful in the knowledge that you are being paid to be hungover – and to mainline hash browns.

Lucy Eckley, a communications consultant, says that what she misses most about working in an office is “having someone to go for impromptu coffee and chats with”. She is right; the tea and coffee break is a true luminary in the office eating (OK, drinking) pantheon. It is boss-approved downtime (as long as you remember their earl grey) and sociable without taking too long. But watch your manners, warns Seaward: “People seem to gain intense pleasure from banging the spoon against the mug. It sets my teeth on edge.”

Finally, we come to the crowning glory of office eating: the birthday cake. Perhaps I am just tragically unpopular, but in my experience there is plenty of chance you won’t get a birthday cake from your loved ones in adulthood. Perhaps your housemate will stick a candle in a croissant – but your humble desire for a chocolate traybake will likely be overlooked. In the office it’s a different story. Your nicest colleague presents you with a resplendent Colin the Caterpillar, portioning it out to make sure the solid chocolate head is yours alone. Who’d work from home, eh?