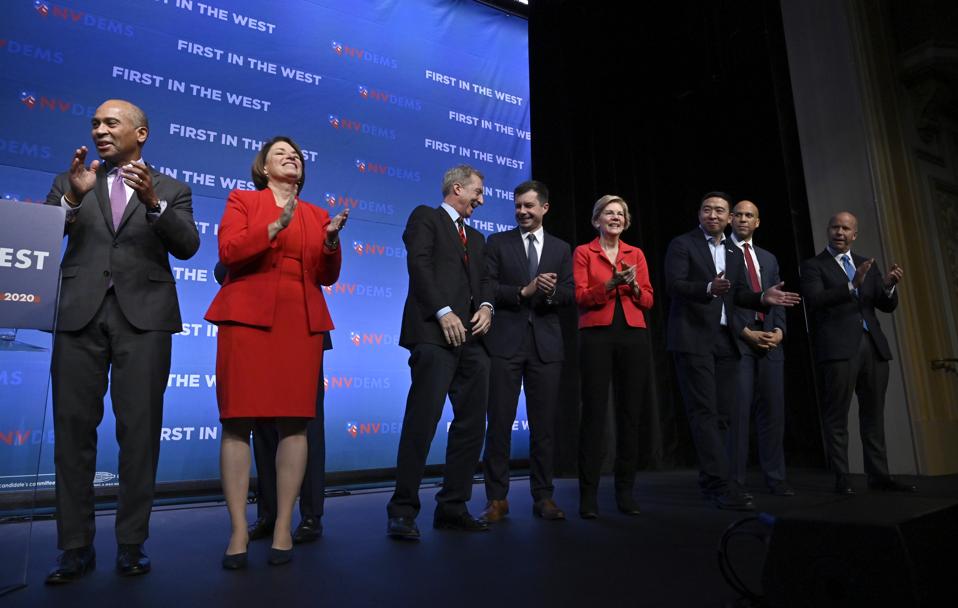 This Saturday, a consortium of education groups is teaming up with MSNBC to host a forum for Democratic Presidential candidates, centered around education issues. The event kicks off at 9:45 and will run most of the day; it will all be livestreamed.

The crowd of about 1,000 invitation-only attendees (I’ll be one of them) includes a sampling of teachers and parents, as well as members of unions and civil rights groups. They are largely pro-public education; at least one pro-charter ed reform group (the Center for Education Reform) has put out an e-mail call to mount a protest at the event.

The format will allow each of the attending candidates to take the stage, make their pitch, and then take questions from the audience. Currently eight candidates are expected; each will have their own baggage to heft onto the stage. Here’s what to watch for with each.

Things To Remember for All Candidates

Big sweeping ideas are nice, but the federal government only has a few levers with which to affect what happens in actual classrooms. Beware promises about things the feds can’t actually do (like, say, abolishing Common Core).

How Businesses That Outperform View Work

A New Mindset: Viewing Cyber As An Enabler Of Business Growth And Innovation Driver

The Final Frontier: Japan’s Space Startups Aim For The Moon And The Stars

We’ll see what kind of question filters the event has in place. Put a lot of ardent supporters of something in a room, and “questions” can quickly become “brief speeches with a question mark at the end.” It will be interesting, if not useful, to see how the candidates handle such moments.

Bennet may not have entered the race as a well-known name to the general public, but he was known in education circles, and not for good reasons. As superintendent of Denver schools, he pushed charterization of the district. His backers include big names in the charter school industry, including Eva Moskowitz and the founders of the KIPP charter chain and Teach for America. The Democrats for Education Reform (DFER) have backed him as well. As superintendent he was also a proponent of high-stakes testing, an issue that is not as sexy as charters, but which leans on a raw nerve in education. Bennet was not seen as a friend of public education before he ever became a candidate. Watch to see how he tries to deal with that history.

Biden’s baggage is the Obama administration, which pursued an ed reform course nearly identical to that pursued by the Bush II administration. High stakes testing. Charter schools. Top-down standards. When it comes to education, there’s no real reason to listen to anything that Biden says that doesn’t start with, “This is what we got wrong, and here’s how I would do it differently.”

At this point, there are few people left in the education sphere who trust him. Booker has a long history with disruptive ed reform, as exemplified by his ties to Betsy DeVos. His attempt to back away from that didn’t convince anybody, and his attempt to back away from backing away didn’t convince his old allies, either. It’s not the flip-flopping; it’s the education side of Booker’s authenticity problem. He can say anything on Saturday; the trick will be convincing anyone that he really means it.

Once upon a time, a smart, charismatic, young candidate appeared suddenly on the national stage, and educators believed that he would rescue education from the forces that had been beating it up. Then Barack Obama appointed Arne Duncan secretary of education and proceeded to double down on most of the bad parts of Bush II ed policy. Well, fool us twice… Buttigieg is turning out to be cut from neo-liberal corporate-friendly cloth, and public ed supporters are suspicious. His new ed plan looks like a mix of old news from other candidates and vague promises, with a meaningless promise to clamp down on for-profit charters. He has to convince education voters that he’s not another person with great rhetoric and anti-public ed policies.

Klobuchar has been flying under the radar, and her support for pubic education has been decent, but it’s not a signature issue for her. Her campaign website does not list education as an issue, though her promise for her first hundred actions in office includes boosting education funding. Klobuchar doesn’t carry any baggage on stage Saturday, but she will need to make a convincing case that education has her attention and that she’s done her homework.

It’s been seven months since Sanders raised the bar for education plans, and there’s not much new to say about his. Sanders has nothing to prove, fix or explain on Saturday. He’s one of the few who has the spare time to poke holes in rival plans.

Who? Even his website is remarkably vague, and being one more rich white guy, just not as old as the other rich white guys (Steyer s a robust 62), is not exactly a way to pop. He really hasn’t had much to say about education so far, and Saturday is his chance to make his case for education voters, but with campaign odds hovering in “snowball in hell” territory, on Saturday he won’t be competing with other candidates so much as with the concession stand at the convention center.

Depending on how you feel about her, Warren’s path on education policy has either been like a flower that grows and blooms and learns, or a leaf that waffles on the wind. Like many, I had my doubts and concerns. But her education plan is the only one in the same class as Sanders. Saturday, watch for what kinds of questions she’s given. There’s ample material for, “You once said…” type questions. It’s also a good chance for her to clarify as policy record that is a bit muddy as well as come out strong for the plan she outlined for the campaign.

There are only really two solidly pro-public education candidates in the race, though both include features that are out of federal reach. Everyone in the room who isn’t Sanders or Warren will have to sell their plan as being on that level, which means either counter-acting their baggage or filling in blanks. The other option to watch for is subtly suggesting that there are other factors to weigh beyond education. The candidates who aren’t in the room may need to offer an explanation for why they didn’t show up for education at all.

It should be a fun day. It seems unlikely to change the course of the election, but in U.S. politics, it’s always a pleasure to see candidates talk as if they take education seriously. Remember that you can livestream the event, or join me on Twitter.