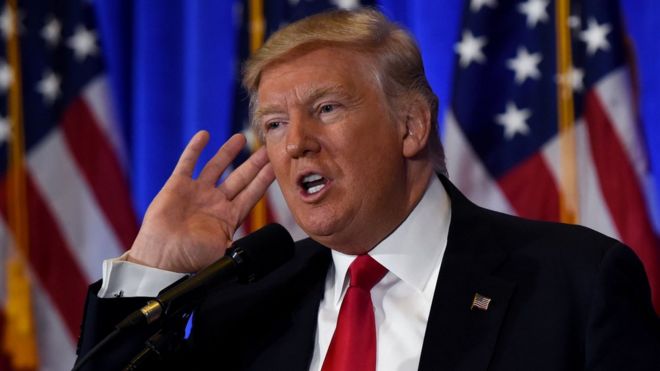 He has only been president for a few days – but already Donald Trump and his team are locked in a new dispute with US news organisations.

The row over the coverage of his inauguration has provided the first indication of what Mr Trump’s relationship with the media will be like.

And it has amazed even some of the most seasoned political commentators.

What is the argument about?

Photos showed more people had attended the swearing-in ceremony of Barack Obama in 2009 than Mr Trump’s inauguration on Friday. The number of rides on the Washington subway system also suggested that attendance lagged behind both Mr Obama’s event and the Women’s March against Mr Trump on Saturday.

But Mr Trump’s administration has angrily challenged the reports on numbers, with the president calling journalists “among the most dishonest human beings on Earth”.

In his first briefing as White House press secretary, Sean Spicer cited figures about attendance that were quickly denounced in many US news outlets as “falsehoods” and even “lies”. Top Trump aide Kellyanne Conway later said Mr Spicer had been presenting “alternative facts”.

How are things different with the new presidency?

Journalists are not supposed to be politicians’ best friends – this would harm their ability to challenge people in power and hold them to account. But the acrimony – and strength of language used – between the new president’s office and some sections of the mainstream media is being seen as unprecedented.

It means the way the US president chooses to get his message out is changing.

Just days before his inauguration, Mr Trump explained his extensive use of Twitter by saying: “I get very dishonest press and it’s my only way that I can counteract.”

Although he now has an official presidential Twitter account as well as his personal one, the early days of his presidency do not suggest a departure from this system.

Seeing as the White House press secretary’s role is to act as spokesperson for the president and the White House, it is perhaps unsurprising that Mr Spicer has demonstrated a similarly combative approach to the media.

Journalists also expect a certain amount of “spin” when given figures in political briefings.

But Mr Spicer’s presentation of what he called “the facts”, debunked almost instantaneously, has led some of America’s most high profile news outlets to rethink how they report on the White House’s statements in the future.

Why the bad feeling between Trump and mainstream media?

The relationship between the mainstream media and Mr Trump has long been tense. During his presidential campaign, he banned outlets such as the Washington Post from rallies, attacked broadcasters for not showing on camera how big his crowds were, and encouraged his supporters to boo reporters at his events.

Portraying himself as an outsider, he referred to the likes of the New York Times and CNN with the same disdain he showed the Washington establishment and the “liberal elite” – out of touch and unwilling to listen to the voice of ordinary people.

It follows then that Mr Trump has favoured once-fringe news sites, many of which are popular with the alt-right, over traditional sources. He has even appointed the former head of Breitbart News Network Stephen K Bannon as his chief strategist.

With the exception of Fox News, mainstream US media have largely returned the sentiment. Of the 100 top circulation print newspapers, only two endorsed him. Reporters have repeatedly taken aim at inconsistencies in Mr Trump’s statements and conducted aggressive investigations into subjects such as his non-payment of taxes.

The relationship hit a new low shortly before his inauguration when several organisations revealed that US intelligence agencies were investigating a report that suggested Russia held lewd information they could use to blackmail the future US president (something both Mr Trump and Russia deny).

In a heated press conference, Mr Trump attacked media outlets and refused to take a question from broadcaster CNN, which he accused of being “terrible” and of trafficking in “fake news”.

Will anything change now Mr Trump is president?

It is still very early days in Mr Trump’s administration and no-one knows for sure what will happen. But the first interactions have certainly been remarkable.

Some Trump supporters will no doubt welcome the continued antagonism towards the media that was central to the Republican’s campaign for president.

However, there are also warnings about the impact of diminished trust.

“If you’re willing to lie about stuff this minuscule, why should anyone believe what you say about the really big things that matter?” asked The Atlantic magazine.

And as editors try to establish the best way of reporting on President Trump’s administration, some commentators are calling for a different approach.

While Fox News published Mr Spicer’s briefing unchallenged, CNN said it did not even broadcast the spokesman’s statement live.

And The Huffington Post is among those that have urged news organisations to employ more scepticism as a general rule. “They should focus attention on the fact that the administration lied, not the content of the lie itself,” it said on Sunday.