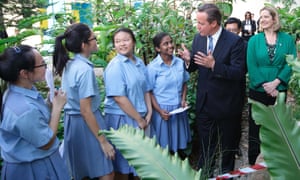 In both your news report (UK schools failing to climb global league table, December 7) and your editorial (Slicing up the Pisa results) you make the mistake, common throughout the media and across many commentators, of assuming that the results from the OECD Programme for International Student Assessment, tell us anything useful about the relative performance of different educational systems.

Each of the 70 or so countries taking part in Pisa has a unique educational curriculum, structure and method of delivery, that reflect tradition, politics and social norms, and it makes little sense to try and judge them using a common test. This is in addition to all the myriad problems associated with translating across languages and cultures; the fact that the vast majority of test questions are not released for public perusal; and the technical difficulty of making any valid comparisons over time.

In addition, the notion that differing performances across nations can be ascribed to the characteristics of national education systems and associated policies is patently absurd. Educational performance is influenced by a variety of socioeconomic factors in addition to what goes on in schools, so that even if we could be satisfied that any given comparison was valid, we could not then simply ascribe it to any particular educational policy or feature.
Harvey Goldstein
Professor of social statistics, University of Bristol

• If we persist in outmoded, politically motivated gimmicks masquerading as education policies, what do we expect? The tragedy is that the children, who are blameless in this mess, are the sufferers, not just now, but also in their future potential and prospects. Presumably the government’s sycophantic “experts” will now advise shovelling money into their current (un-evidenced) hobby horse, selective schools. Why not try something original? Let’s go back to a model of pre-service teacher training that was rigorous, demanding and meaningful, and which prepared teachers to have a range of pedagogical methods to support learning. The current model of quick fix, minimum competency training isn’t working. Teaching is a profession and needs to be treated as one.
Professor Bill Boyle

Your editorial suggests that the Pisa results for Scotland and Wales are inferior to those of England because the misguided Celts chose to “rebuff” Tony Blair’s educational “reforms”. This is unlikely, to say the least. Although indulging in an unconscionable amount of top-down meddling, much of it reactionary and nearly all of it completely pointless, the Blair governments enacted hardly any educational reforms – and certainly none of a kind that might have improved the country’s standing in Pisa. Scotland and Wales did not “rebuff” these reforms, such as they were, but decided to reject some aspects of the regime of testing and associated league tables introduced by the 1988 Education Reform Act.

Whether this has affected their Pisa standing relative to that of England is not at all clear, but none of it has anything to do with Blair, who deserves credit for investing a lot of money in buildings and equipment, but whose record otherwise gives credence to the widely circulated story that, when he said in 1997 that his priorities were “Education, education, education”, it was because his autocue got stuck.
Michael Pyke
Campaign for State Education

• Your education letters (6 December) all refer in their different ways to a need for the secondary level curriculum to be broadened. This topic, debated endlessly for at least the last 40 years, had its last big chance with the 2004 Tomlinslon report, rejected by Tony Blair as risking unpopularity among middle-class voters.

The report aimed to modernise a curriculum and qualifications governed by academic subject fiefdoms and largely unchanged from their Victorian public school origins, which did not include any streams of vocationally inspired learning. So Mike Tomlinson’s report gathers dust in an education department cupboard, when it provides answers to many of the problems in underperformance of schools, especially that of pupils not engaged by academic courses. Yet it connects with Theresa May’s anxiety about social moblity – as well as the nation’s need for greater skills.
Michael Harrison
Formerly chief education officer of Sheffield

So UK schools are failing to climb global league table. If the majority of pupils have some understanding of the changing world of work, with its falling wages, precarity and massive and growing inequality, what incentive do they have to do well at school?
Andrew McCulloch
Collingham, Nottinghamshire

• Singapore may be top of the Pisa chart, but youth suicide rates there are also rising. Academic pressure is cited as one of the causes. We need to be careful what we wish for.
Fiona Carnie