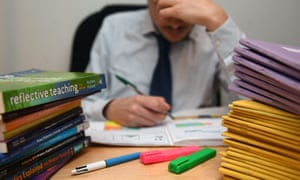 The government is being urged to monitor teachers’ wellbeing after research revealed that one in 20 are reporting mental health problems which last more than a year.

The study, funded by the Nuffield Foundation, is the first to examine the mental health and wellbeing of teachers in England over three decades, based on data from more than 20,000 staff.

It found that around 5% of teachers today are suffering long-lasting mental health problems, up from just 1% in the 1990s, and there has been a similar increase in prescribed antidepressant medication.

The figures will ring alarm bells for policymakers who are grappling with a crisis in teacher recruitment and retention in England’s schools at a time when the number of children of school-age is on the increase. The government has made a series of pledges to reduce workload, but teachers say they are yet to reap the benefits.

According to the report, a third of new teaching recruits leave the job within the first five years. The paper also quotes recent Department for Education (DfE) research, which found that “sleeping problems, panic attacks and anxiety issues” had contributed to teachers’ decisions to quit the profession.

The lead author of the report, John Jerrim, a professor at the UCL institute of education, said: “The teaching profession in England is currently in the midst of a crisis and one potential reason why it’s struggling to recruit and retain enough teachers is due to the pressures of the job.

“It has long been known that teaching is a stressful and challenging career and we wanted to see if the mental health and wellbeing of teachers had improved or declined, especially in light of government promises to ease the burden upon the teaching profession.”

The report concedes that the increase in reported mental health problems is not specific to education, but can be seen in other professions, including those working in human resources and accountancy which may be due to an increased willingness to discuss mental illness and seek help.

It concludes: “In our view, the most pressing issue is for the DfE to make a commitment to monitor the mental health and wellbeing of the teaching profession – similar to the commitment it has made to monitoring teachers’ workloads over time.”

“The sharp rise in teachers reporting long-term mental health conditions mirrors the increase in the severity of cases that we support through our counselling helpline. Teachers are presenting with ever more severe mental health symptoms.”

Dr Mary Bousted, the joint general secretary of the National Education Union, said it was no wonder schools were unable to recruit and retain staff when workload demands continued to be unsustainable. “The challenge for the government is to address these issues and ensure that education staff are nurtured and supported in their role but there is currently little sign of any concrete action in this respect.”