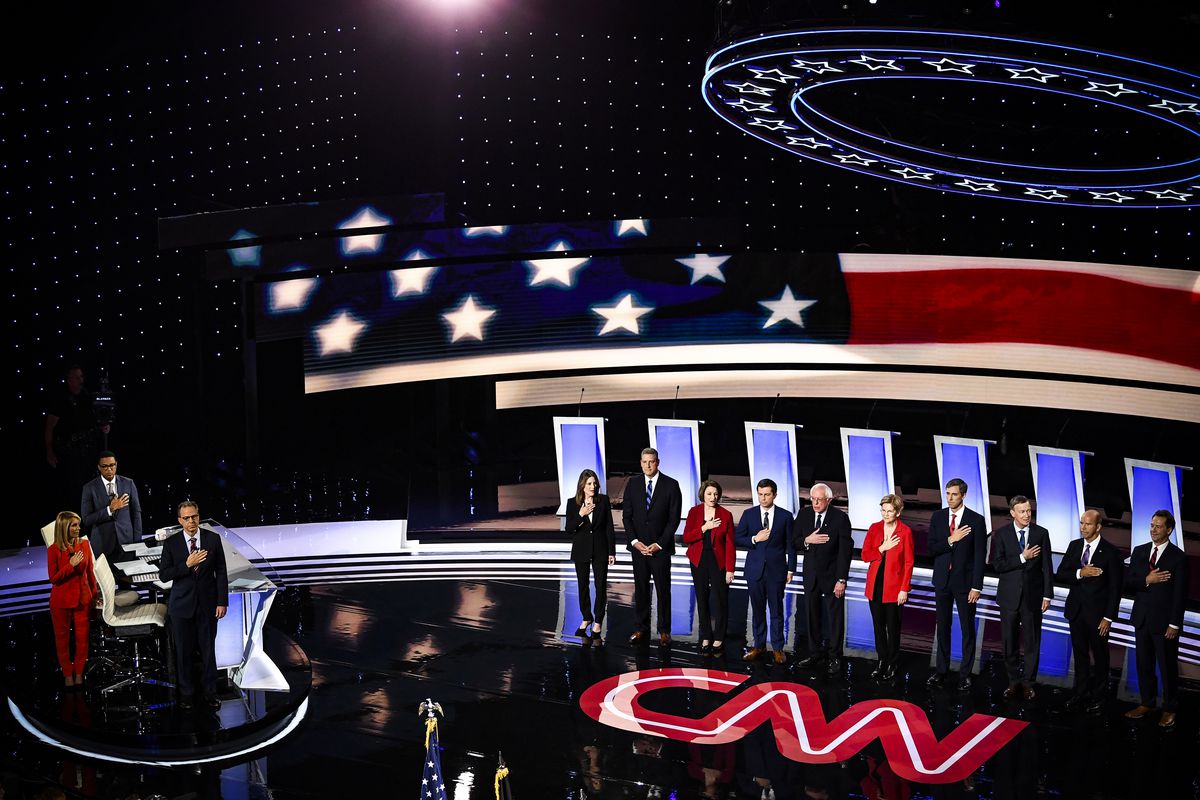 The 2020 presidential candidates at the opening night of the second Democratic primary debate fell into three buckets on health care, the top issue for Democratic voters so far.

In an intricate and often confusing section of the debate, with candidates jockeying to define what “Medicare-for-all” even means, the first 30 minutes of the debate brought some clarity. There are essentially three perspectives from Democrats: 1) the ones who want to blow up the whole system for universal single-payer, 2) the ones who worry about the disruption of a single-payer system and its ensuing political fallout, and 3) those who try to split the difference, speaking instead to values like universal coverage.

Sens. Bernie Sanders (I-VT) and Elizabeth Warren (D-MA) firmly stated their support for Medicare-for-all, a single-payer system that would put every American on a government insurance plan. Former Rep. John Delaney (D-MD) and Montana Gov. Steve Bullock were dismissive of such a proposal, warning of the potential for political backlash if private health insurance is phased out and taxes are raised to cover a substantial increase in government spending. South Bend, Indiana, Mayor Pete Buttigieg and former Texas Rep. Beto O’Rourkefell somewhere in between, signaling their sympathies for Medicare-for-all’s goals while also being malleable about the policy plan to achieve them.

The disagreements onstage, which were sometimes difficult to follow, underline the fundamental choice facing Democratic voters this primary season. Should they embrace bold progressive platforms that Republicans are sure to label as socialist and calamitously expensive in the general election? Should they stick with a middle-of-the-road agenda, hoping to win back center-right voters skeptical of President Trump? Or should they eschew policy details altogether and instead run on values that place the party in sharp contrast to the man currently occupying the White House?

It’s much too soon to say what Democratic voters will ultimately prioritize. But as the health care debate neatly illustrates, the candidates are starting to sort themselves out in a way that does make the options a little clearer.

Some Democrats are all-in on Medicare-for-all

Sanders wrote the Medicare-for-all bill that was introduced in the Senate and Warren co-sponsored it, so it wasn’t a surprise that the two most progressive candidates onstage unabashedly embraced single-payer at the second Democratic debate.

“Right now we have a dysfunctional health care system: 87 million uninsured or underinsured, 500,000 Americans every year going bankrupt because of medical bills, 30,000 people dying while the health care industry makes tens of billions of dollars in profit,” Sanders said, responding to Democratic warnings that his plan would be a political loser. “Health care is a human right, not a privilege. I believe that. I will fight for that.”

Sanders and Warren swatted back at questions from CNN moderator Jake Tapper about middle-class tax increases that would be necessary to fund such a plan, and Sanders even chided Tapper.

“Jake, your question is a Republican talking point at the end of the day,” Sanders fired back. “And by the way, the health care industry will be advertising tonight on this program.”

Taxes would have to be raised to cover the cost of a single-payer plan, though those tax increases would be offset, in part or in full, by the elimination of private insurance premiums. (For what it’s worth, a RAND study of a proposed single-payer plan in New York statefound almost a one-for-one match between the necessary tax increases and the savings on premiums for families.)

“Costs will go up for billionaires and go up for corporations,” Warren put it simply, offering one of the most clarifying moments in an otherwise in-the-weeds debate. “For middle-class families, total costs will go down.”

For Sanders and Warren, health care and Medicare-for-all are not only part of their policy agenda but a proxy for their overall message that they are willing to fight for the big changes that they believe America needs — and, whether they put it this way or not, other Democrats are not willing to fight for.

“We’re not going to solve the urgent problems that we face with small ideas and spinelessness. We’re going to solve them by being the Democratic Party of big structural change,” Warren said in her opening statement. (Sanders led his by citing the number of uninsured and underinsured Americans right now.) “We need to be the party that fights for our democracy and our economy to work for everyone.”

Some Democrats are totally opposed to Medicare-for-all

Delaney was the Democratic opposition to Medicare-for-all personified. He slammed the single-payer plan again and again as unrealistic and politically dangerous. (The former congressman notably, one, has his own alternative health care plan and, two, has a history working in private health care finance.)

“We don’t have to go around and be the party of subtraction and telling half the country with private health insurance their health insurance is illegal,” Delaney said to open his parry with Sanders. “We can give everyone health care and allow people to have choice. That’s the American way.”

It is true that the Medicare-for-all bill sponsored by Sanders and Warren would effectively eliminate private insurance (it bans anything that is duplicative of the government plan that would cover almost every medical service), and that polling suggests support for Medicare-for-all drops when voters are told it outlaws private coverage. That is what Delaney worries about. Medicare-for-all supporters are betting that Americans will come around when they understand what they’d get (and that they could pay less) under single-payer.

He wasn’t alone, either. Bullock, who bills himself as a pragmatic progressive who won two elections in a Trump state, also cited the risk of disruption in opposing Medicare-for-all.

“At the end of the day, I won’t support any plan that rips away quality health care from individuals,” Bullock said. He instead said he supports a public option that allows anybody to buy into a government plan. “That’s the way to get there without disrupting the lives of 160 million people.”

Sen. Amy Klobuchar (D-MN), another center-left candidate, touted the public option as the swiftest action a Democratic White House and Congress could take to expand coverage. It should be remembered that a Medicare-for-all plan would have a very hard time passing even a Democratic-controlled House and Senate, given the skepticism from the party’s moderate wing about the plan.

“This is the easiest way to move forward quickly and I want to get things done,” Klobuchar said.

Two younger white men on stage who have at times been media rock stars accused of being light on policy — Buttigieg and O’Rourke — sought to split the difference. Buttigieg in particular has picked up the “Medicare for all who want it” slogan.

The idea, best exemplified in the Medicare for America bill, is that any American would be allowed to buy into a government-run insurance plan. (Former Vice President Joe Biden, the party’s current frontrunner for the nomination, who is in Wednesday night’s debate, also backs a public option anyone can buy into.) The employer-sponsored insurance that currently covers half of Americans, which would be eliminated under the Medicare-for-all bill, would remain if the employers and employees so choose. Both Buttigieg and O’Rourke have spoken favorably of that proposal.

Buttigieg, at Tuesday night’s debate, framed it as a pathway to true Medicare-for-all. He expressed a hope that Americans would choose the government plan over the “corporate” option — but emphasized the need for a choice.

O’Rourke dismissed the binary choice between single-payer and a more limited public option.

“I think we’re being offered a false choice: some who want to improve the Affordable Care Act at the margins, others who want a Medicare-for-all program that will force people off of private insurance. I have a better path,” he said on Tuesday. “Our plan ensures that everyone is enrolled in Medicare or can keep their employer-sponsored insurance. When we listen to the American people, this is what they want us to do. They want everyone covered but want to be able” to choose.

For single-payer supporters, this halfway point still leaves for-profit insurance companies operating and doesn’t offer the same level of financial security (there would still be out-of-pocket payments) that their plan, proposing medical care free at the point of service, does. The centrists probably still see it as too ambitious and vulnerable to political attack.

The progressives in the Buttigieg and O’Rourke vein view Medicare-for-all as a step too far, as a matter of policy or politics, but they still want to propose a substantial change for a system that many Democrats view as fundamentally broken. It’s quite a fine line, but it’s their way of distinguishing themselves from the left and the center.

On health care, those are the three paths being laid out before Democratic primary voters in the 2020 campaign. They’re still sorting out their own feelings. But eventually, they’ll have to choose one.