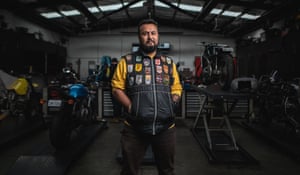 Jacob Simkin believes in humanity. But while documenting the fallout from airstrikes and artillery barrages in north-eastern Syria, he says this optimism has created a war inside him. The Melbourne-raised photographer is more at home in chaos than in peace.

Simkin has also covered conflict in Somalia, Pakistan and Afghanistan over the past 15 years, and has taught activists how to shoot video to document war crimes. He speaks to Guardian Australia from the Syrian town of Ras al-Ayn on the Turkish border, and says his career has come at a personal cost. He was diagnosed some years ago with post-traumatic stress and moral injury syndrome: he feels guilt over those he cannot help. He finds it hard to relate to people who are not consciously trying to make the world a better place.

He recalls a pivotal personal moment when he accompanied Syria’s White Helmets humanitarian volunteer force. “A mother was in a bus and her head had been seared from the sheer heat of the missile, and her infant lay dead in her arms. I felt like none of my photos or videos would bring her back.”

Simkin’s story is one of five that form the subject of Melbourne director Genevieve Bailey’s feature film Happy Sad Man, which investigates how men, who represent 75% per cent of those who kill themselves in Australia, navigate emotional ups and downs. The film’s male subjects have all suffered forms of anxiety and depression.

A passionate motorcyclist, Simkin finds his therapeutic balance when he returns to Melbourne by working on bikes, inviting friends over for barbecues, or working on a travel video blog he runs with mates.

He says it’s important that other sufferers know they are not alone. “I always hated being asked, ‘How are you feeling?’” he says. “I want someone to include me in things, to be busy doing things so my mind doesn’t wander. It is OK to be not OK, but it is not OK to be alone – [although] sometimes loneliness is fine, as long as you are busy doing something.”

But how does someone worried about a family member or a friend approach the topic? Professor Ian Hickie, co-director of health and policy at the University of Sydney’s Brain and Mind Centre, emphasises staying connected. “We stay talking because I might need you and you might need me,” he says. “So [then] more intimate questions don’t come out of the blue or seem very out of place. It’s then OK to talk about ‘tough times’ or comment on observed behaviour: for example, they’re not coming out so much, [they are] drinking more, not going to work, they’re more angry with their partner, more stressed and not enjoying things.”

If you tell someone you’re doing it a bit tough, you’re opening up the doors for them to say they’re not OK, and then you can help each other out

New Zealand-born Grant Trebilco, who lives in Bondi, is another Happy Sad Man subject. A keen surfer, Trebilco’s life spiralled after a breakup with a girlfriend. He “lost all sense of reality”: he walked into his workplace dressed as a Mexican tequila farmer, declaring he wanted to quit his job to start a charity called Where the Party At. He then paddled into a surfing contest semi-final he had not officially entered on a stolen board, under the illusion he was raising funds for charity.

Handcuffed by police on the beach, Trebilco was hospitalised for 10 days under heavy sedation. He was diagnosed with bipolar disorder and only later realised he had been suffering from psychosis.

Now taking two types of medication, Trebilco’s “recipe” for looking after himself involves acknowledging he will have the illness for the rest of his life. He trains at the gym and values his sleep, and knows he needs regular professional “check-ups from the neck up”, he says.

“The difference is I don’t fight [bipolar] anymore. A key part of my recipe is surfing, but you can’t be in the ocean all day, so I need to talk about it, and I need to be surrounded by good people.”

Trebilco says people who sense a loved one is struggling with their mental health just need to “be there, give them a hug, let them talk it out, listen and then ask how you can help. ‘Can I take you to a doctor?’ is a hard question to ask, but just check in. The biggest thing you can do to start that conversation is be completely honest about how you’re feeling. If you tell someone you’re doing it a bit tough, you’re opening up the doors for your friends and family to say they’re not OK, and then you can help each other out.”

The best time to have these conversations is during a normal activity you do together, says Hickie – eating a meal, walking, surfing, carrying out home repairs – and “as a normal part of conversation, not a special ‘we must now sit down and talk about emotional things’.” Hickie advises avoiding phrases such as “I think you should get help” or “you should see a doctor or a counsellor”. Instead, gently suggest: “Let’s go and get more information.” If it appears necessary to go beyond online sources to seeing a health professional in person, Hickie suggests you say: “We’ll go together.”

“It is really about building trust first,” says Simkin. “Usually I found [myself] bringing up the conversation during activities: working on bikes, road trips, hikes, a barbecue. Just get out of the everyday box: head to the smash house, do some paintballing.

“Don’t go straight to the point. Build it up. I had a few best friends when I came back home [but] most of them have not much clue of the things I have gone through. It is a slow process and it is a matter of just them being there for me.”