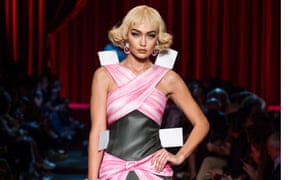 The most powerful women of the catwalk circuit are no longer to be found on the front row or in the industry boardrooms – but on the catwalks themselves. A tiny elite of models who have become social media superstars wield influence and commercial clout the like of which the supermodels of the 1990s could only have dreamed of.

Milan fashion week has long been ruled by luxury brands, but this week a new brand leapfrogged Prada and Gucci to dominate coverage: that of 21-year-old Gigi Hadid, whose stratospheric rise in modelling is inseparable from the 23 million followers she has on Instagram. (To put this figure into perspective, consider that Donatella Versace has 858,000 followers.) This week Hadid, the star of MaxMara’s advertising campaign, walked in their catwalk show along with her 19-year-old sister Bella. The pair also starred on the catwalk for Fendi, designed by Karl Lagerfeld.

More significantly, both of the most talked-about incidents of Milan fashion week happened away from the catwalk, and both involved Gigi Hadid. An Instagram picture showing herself in a MaxMara coat and inviting followers to a public appearance at the label’s flagship store had garnered well over a million likes by the night of the event, which proved so popular that it led to a virtual roadblock in the centre of Milan. The following morning, a video of Hadid fighting off an assailant who picked her up from the pavement went viral. For all the best efforts of Gucci and Prada, the bandwidth of Milan fashion week was largely taken up by Hadid.

Instagram, initially conceived as an image-sharing platform for amateur photography enthusiasts, has evolved into a powerful system for delivering information in the visual, bite-size chunks modern audiences crave. It is a set-up which favours the young, being both tech-savvy and photogenic enough for selfies, and has enabled individuals such as Hadid to establish a considerable power base. Such is the potential publicity brought by a model with a social media following that it has become commonplace for casting directors to request only models with over 10,000 followers when recruiting for a show.

At his blockbuster New York fashion week show, Tommy Hilfiger, who has been a fashion mogul a decade longer than Hadid has been alive, chose to give Hadid equal billing to himself in all aspects of promotion for a joint Tommy x Gigi collection. It was a clear sign that Hilfiger, whose fortune was forged on a strong instinct for the commercial zeitgeist, recognises Hadid’s influence with consumers to be level with his own.

Hadid was able to dominate the first half of Milan fashion week because the only two models with an even greater Instagram reach – Kendall Jenner, whose 65.9 million followers outnumber the population of Great Britain, andCara Delevingne, who has 33.9 million – were not yet in town.

During a joint appearance with Hilfiger on American talk show The View, Hadid defended her Instagram power base against those who use the term “social media model” pejoratively, querying why others are “judging me for a tool that I think I would be dumb not to use”.

The platform which Hadid has to speak to fans makes her valuable – and expensive – to the brands that employ her. It also gives her an independent voice which previous generations of seen-and-not-heard models did not have. .

The industry shift in the balance of power from the traditional editorial tastemakers represented by Anna Wintour to the catwalk queens of social media is illustrated by this month’s American Vogue. Wintour’s totemic September issue stars Kendall Jenner, a member of the Kardashian family and model for Chanel, Balmain and Estée Lauder, with the coverline “the face that launched a billion likes”. Dazed magazine called the issue “a cultural milestone”.

Another significant cultural milestone was reached this week when Kate Moss, an icon forged in a pre-internet age who rarely speaks in public, finally joined Instagram.