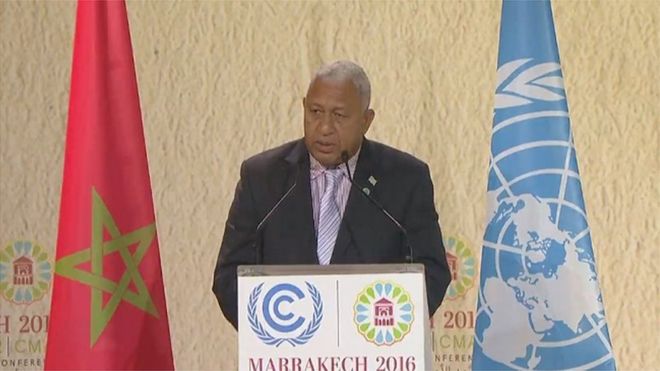 The next head of the UN global climate talks has appealed for the US to “save” Pacific islands from the impacts of global warming.

Fijian Prime Minister Frank Bainimarama said that the islands needed the US now as much as they did during World War Two.

He was speaking as global climate talks in Marrakech came to an end.

Mr Bainimarama said that climate change was not a hoax, as US President-elect Donald Trump has claimed.

Mr Trump has promised to pull the US out of the Paris Climate Agreement and scrap all payments for UN global warming projects.

But as he accepted the role of president of the Conference of the Parties for the year ahead, the Fijian leader took the opportunity to call on to the next US president to step away from his scepticism.

“I again appeal to the President-elect of the US Donald Trump to show leadership on this issue by abandoning his position that man-made climate change is a hoax,” said Mr Bainimarama.

“On the contrary, the global scientific consensus is that it is very real and we must act more decisively to avoid catastrophe.”

He also made a direct call to the American people to come to their aid in the face of rising seas, driven by global warming.

“We in the Pacific, in common with the whole world, look to America for the leadership and engagement and assistance on climate change just as we looked to America in the dark days of World War Two.

“I say to the American people, you came to save us then, and it is time for you to help save us now.”

After two weeks of talks here in Marrakech, participants arrived at a consensus on the next steps forward for the landmark climate treaty.

This gathering saw the opening of CMA1, the Conference of the Parties meeting as the signatories of the Paris Agreement, which aims to limit global temperature rises.

CMA1 will be the formal UN body that will run, manage and set the rules for the operation of the Paris treaty.

The number of countries who have ratified the agreement jumped above 100 with the UK joining during the last few days of the conference.

“Delegates in Marrakech made crucial progress in building the foundation to support the Paris agreement, which went into force just days before COP22,” said Paula Caballero from the World Resources Institute.

“Most importantly, negotiators agreed to finalise the rules of the Paris Agreement by 2018 and developed a clear roadmap to meet that deadline.”

The participants also agreed the Marrakech Proclamation, a statement re-affirming the intentions of all 197 signatories to the Paris deal.

Seen as show of unity on the issue in the light a possible US withdrawal, countries stated they would live up to their promises to reduce emissions. The proclamation also called on all states to increase their carbon cutting ambitions, urgently.

Some of the poorest nations in the world announced that they were moving towards 100% green energy at this meeting.

The Climate Vulnerable Forum said that the 47 member countries, including Bangladesh, Ethiopia and Yemen, would achieve this goal between 2030 and 2050. And they challenged richer countries to do the same.

Despite these steps forward there were still some areas of significant difference between the parties, especially over money. The talks will continue in 2017 with a new US delegation picked by the Trump administration.