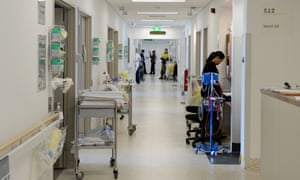 A review from the consumer advocacy group Choice published on Wednesday found the opposite. More than 215 “silver” and “silver plus” policies cost more than “gold” policies, the report found, leaving consumers as confused by their options as ever. An Australian Medical Association report published one day later warned private health policies remained unaffordable and non-transparent.

The other cornerstone of the reforms – lower premiums for people under 30 – has failed to stop the exodus of young people from the system, Australian Prudential Regulation Authority [Apra] data shows. The financial authority in May issued a directive to the private health industry to take responsibility for the decline in affordability and uptake of insurance rather than rely on government reforms.

The situation has several health economists and policy experts questioning whether the private health insurance industry, far from being salvageable through reform, is worth saving at all.

Apra executive board member Geoff Summerhayes said it was “frustrating to see little evidence that insurers are taking actions that reflect their own assessment of the heightened risks in this challenging environment”.

“Apra recognises the industry has been under duress for some time, and the main factors, such as rising demand for health services and the soaring cost of treatments, are beyond insurers’ direct control,” he said. “But that’s not an excuse for doing nothing and hoping the government will fix everything.”

According to the Consumers Health Forum and the Australian Healthcare and Hospitals Association [AHHA] the only way forward is for the federal government to order an independent Productivity Commission review of the whole healthcare system, both public and private components. Unlike previous examinations of the private health insurance industry, this review should not be ordered from the starting point that the private health insurance must be saved, rather would question whether it should be.

Can you imagine any other product where we say ‘you don’t want to buy it, we think you should, so you’re forced into it?

“While there is a cost associated with holding such a review, this must be seen in the context of the latest data we have showing that Australia spent $185bn a year on healthcare,” he told Guardian Australia.

“AHHA would not say that the death of private health insurance is inevitable. But we need to hold all levels of government to account in reforming our healthcare system to better coordinate the delivery of healthcare, to take a longer-term view of individual’s healthcare journey, to remove low value care, to stop some healthcare providers charging exorbitant fees, to remove inequities in access to healthcare and health outcomes, and to improve transparency on outcomes and costs that matter to people.

“Private health insurance is seen by virtually all as being too expensive, too complicated and opaque, and not offering value for money.”

Grattan Institute health economist Dr Stephen Duckett said the death of the private health industry was inevitable. But he said while it was in a “death spiral, it’s a slow death spiral”.

“Can you imagine any other product where we say ‘you don’t want to buy it, we think you should though, so you’re forced into it? It’s the most amazing policy for an economy where we value choice.”

At a presentation to the Actuaries Institute conference in Melbourne in October, the Private Healthcare Australia chairman, John Hill, said insurers would find it challenging not to pass on the rising costs of medical devices through premium increases come April.

“Inflated prices for established medical technologies must come down in line with the rest of the world,” Hill said. “One of the most commonly used implants, cardiac stents, are five times the price in Australia as they are in New Zealand.” It was a claim the chief executive of the Medical Technology Association of Australia, Ian Burgess, rejected as “absurd”. He accused the private health insurance industry of “an increasingly desperate attempt” to rein in costs and maintain profitability “by pointing the finger at everyone else”.

The chair of the Australian Healthcare Reform Alliance, Jennifer Doggett, said all of the reforms implemented to salvage private health insurance to date had been cosmetic. She said while reviews of the system had been done before, the benefit of a productivity commission review would be its scope.

“We haven’t had a review yet that includes the premise that we might not need private health insurance at all,” she said. “The reviews we’ve had so far have not examined what is best for Australia. We need a review that looks at consumer needs, not the needs of the private health insurance sector or doctors who want to keep their fees high, or the private sector, or some other interest group.”

As the climate crisis escalates…

… the Guardian will not stay quiet. This is our pledge: we will continue to give global heating, wildlife extinction and pollution the urgent attention and prominence they demand. The Guardian recognises the climate emergency as the defining issue of our times.

You’ve read 10 Guardian articles in the last two months – made possible by our choice to keep Guardian journalism open to all. We do not have a paywall because we believe everyone deserves access to factual information, regardless of where they live or what they can afford.

Our independence means we are free to investigate and challenge inaction by those in power. We will inform our readers about threats to the environment based on scientific facts, not driven by commercial or political interests. And we have made several important changes to our style guide to ensure the language we use accurately reflects the environmental catastrophe.

The Guardian believes that the problems we face on the climate crisis are systemic and that fundamental societal change is needed. We will keep reporting on the efforts of individuals and communities around the world who are fearlessly taking a stand for future generations and the preservation of human life on earth. We want their stories to inspire hope. We will also report back on our own progress as an organisation, as we take important steps to address our impact on the environment.

We hope you will consider supporting the Guardian’s open, independent reporting today. Every contribution from our readers, however big or small, is so valuable.